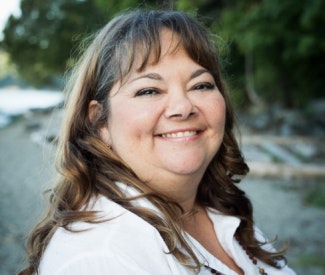 This interview is scheduled for early April 2021

Monique Gray Smith is a Canadian writer of children's and young adult literature.[1][2] She is also an international speaker and consultant. Of Cree, Lakota and Scottish descent, Smith is based in Victoria, British Columbia.[2][3]

She is most noted for her young adult novel Tilly, a Story of Hope and Resilience, which won the Burt Award for First Nations, Métis and Inuit Literature in 2014,[4] and her children's picture book My Heart Fills With Happiness, which won the Christie Harris Illustrated Children's Literature Prize in 2017. In 2018 she was named as a finalist for the TD Canadian Children's Literature Award for Speaking Our Truth: A Journey of Reconciliation,[5] and for the Burt Award for The Journey Forward, a compilation of two novellas co-written with Richard Van Camp.[6] In the same year she published Tilly and the Crazy Eights, a sequel to her first novel.[7]

In addition to her work as a writer, Smith has worked as a psychiatric nurse in Indigenous communities for over 25 years, having completed formal nurses training at Douglas College.[8] She also spent 5 years working as Instructor for Curriculum Design at the Justice Institute of BC and has been an Inspirational Speaker for Little Drum Consulting for more than 20 years.[9]