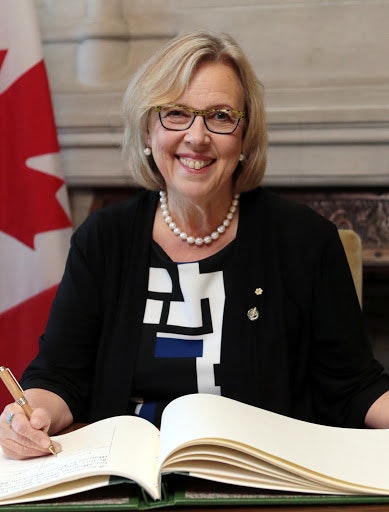 After receiving her law degree from Dalhousie University, Elizabeth was admitted to the Bar in Nova Scotia and Ontario, and began working on behalf of consumer, poverty and environmental groups as the Associate General Counsel for the Public Interest Advocacy Centre. She also worked extensively with Indigenous Peoples internationally, particularly in the Amazon, as well as with Canadian First Nations. She was the first volunteer Executive Director of Cultural Survival Canada from 1989-1992, and worked for the Algonquin of Barriere Lake from 1991-1992.

In 1986, Elizabeth became Senior Policy Advisor to federal Environment Minister Tom McMillan. She was instrumental in the creation of several national parks, including the Gwaii Haanas National Park Reserve. She was also involved in negotiating multiple pieces of new legislation and pollution control measures, including the Montreal Protocol to protect the ozone layer. In 1988, she resigned on principle when the Minister granted permits for the Rafferty-Alameda Dams in Saskatchewan as part of a political trade-off, with no environmental assessment. The permits were later quashed by a Federal Court decision, which ruled that the permits had been granted illegally.

She has taught courses at the School of Policy Studies at Queen’s University, as well as teaching for a year at Dalhousie University while developing the programme established in her name in Women’s Health and Environment. She holds four honorary doctorates from Mount Saint Vincent University, Mount Allison University, University of New Brunswick, and the Atlantic School of Theology.

In June 2006, Elizabeth stepped down as Executive Director of the Sierra Club of Canada, a post she had held since 1989, to run for the leadership of the Green Party of Canada. She was successful in her bid and was elected as the Green Party’s tenth leader at their national convention in August 2006.

In the 2011 election, Elizabeth made history by being the first Green Party candidate to be elected to the House of Commons. She was re-elected by the constituents of Saanich—Gulf Islands in 2015.